Can an Old Veteran Let Go of the Love and Pain He Left Behind? 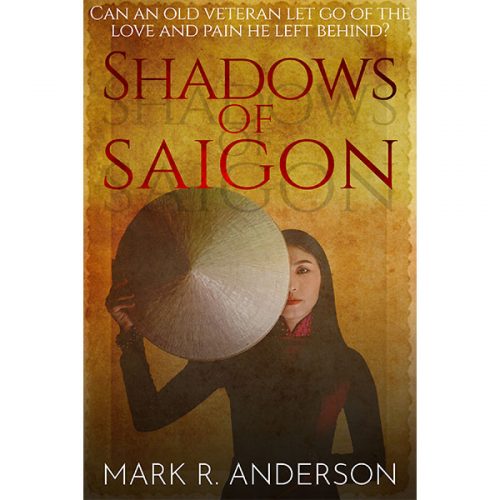 Shadows of Saigon is the story of Grady Cordeaux, a 68-year-old loner, Louisiana farmer and Vietnam veteran, who suffers a heart attack.

Under heavy sedation he relives his senior year in high school (1970), his first girlfriend, and the incidents that forced him into the Army. He relives the trauma, combat, and anxiety he suffered in Vietnam. Most importantly, he relives the love between him and Tien, the daughter of the most prominent businessmen in Southeast Asia. They shared the deepest love, marriage, and a son at the cost of losing her family. In a final attempt to reconcile with her parents they go to her family’s restaurant, when a VC bomb explodes.

In a strange twist of fate, a Dr. Wellington, of Vietnamese ancestry, sees the photograph of Tien on Grady’s nightstand in the hospital. Wellington challenges Grady about the photo.

Can Dr. Wellington help Grady finally let go of the Shadows of Saigon?

Having lived an exciting, well-traveled life, my family and friends often suggested I write a book. Shadows of Saigon was born out of my desire to finally write a fictional work.

This story evolved from two themes that had shaped my life– love and war. Like Grady in “Shadows,” I have known deep, eternal love. I met my wife 43 years ago in high school at Clark Air Base, Philippines. We ignited a spark that turned into a flame, and it still burns today. My accomplishments and any good that is in me is because of her. As I get older, I have begun to wonder what I would do if I lost the love of my life. The idea paralyzes me with heartache. I wanted to write about that kind of love.

The Vietnam war defined my childhood in the 1960s. My father and uncle served five tours between them. I remember, as a seven-year-old, being awakened by sobbing coming from the dining room. One night I peeked out of my bedroom door and saw only the burning ember of a cigarette as my mother wept in the dark for her husband who was away at war. It was one miniscule, but poignant example of despondency that engulfed us during a time our nation was deeply divided. Today, Vietnam veterans are in their twilight years. I wonder if any of them experienced guilt, horror, or loss in the war that kept them from being able to live full productive lives or were they merely shadows of who they could have been.

This is a fictional story about an American patriot, Grady Cordeaux. Grady reveals his life’s journey to us, retrospectively, through his relationship with a decades-long friend, R.C. Carter.

His story, set in the turbulent Vietnam War era and beyond, is one that many Americans can relate to; that is, a rural upbringing, a loving family, high school sweetheart, and finding his post-high school dreams suddenly diverted and out of his control.

While describing Grady’s army duties, relationships and heroism in combat, the author gives us an unusual but insightful accounting of the Vietnam War from the perspective of a junior non-commissioned officer. Those young men and women came home with mixed emotions; just happy to be alive, dejected, rejected, physically maimed, mentally broken, appreciated and proud. Those experiences shaped a generation of Americans for better or worse.

Shadows of Saigon, by this gifted new novelist Mark Anderson, artfully builds on itself page-by-page. You will find yourself playing mind games predicting where Grady’s life is headed only to be surprised, elated and sometimes disappointed all in the same spell-binding chapter. You will find it difficult to put this book down.”

Books in Review II from The VVA Veteran

When you intentionally bring back memories of the past, you often encounter issues that have yet to be resolved. For Grady—and for many of the rest of us—the time for dealing with those issues is beginning to run out."

Mark R. Anderson retired after 35 years of distinguished intelligence service and 10 years concurrently as an officer in the naval reserve. He earned a B.S. from the University of Maryland and an M.S.S.I. (Strategic Studies in Intelligence) from the Joint Military Intelligence College in Washington D.C. He has authored hundreds of analytical reports for policymakers, and Shadows of Saigon is his debut fictional work

Mark, his wife, and youngest daughter make their home in Pinehurst, North Carolina where he spends a lavish amount of time on the golf courses or on his boat.

Right-click to save files: Old-Stone-Press-Shadows-of-Saigon-HiRes-cover-v1.jpg