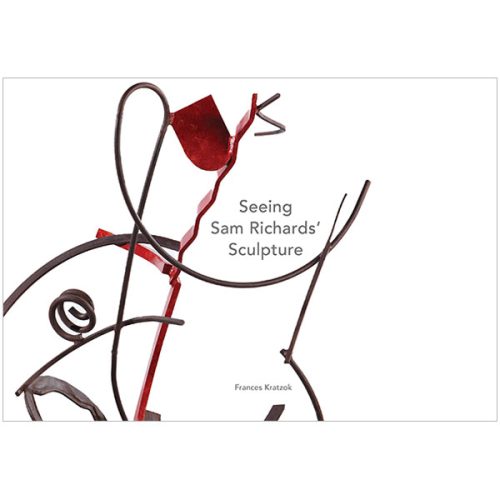 I have known Sam Richards since 1976 when I produced an invitational exhibition of his sculpture at the New Harmony Gallery of Contemporary Art. I say, “have known” him, despite his untimely death in 1994, because since then I have produced two additional solo exhibitions of his work, and to know his work is to know Sam.

Sam was reserved, but his work was so carefully considered that it speaks visually extremely clearly. I know this type of communication is often understood only intuitively, yet its power is inherent in its confrontational physicality, its human scale and enigmatic silence to usual verbal description. Yet being able to talk about the work is also worthwhile and revealing, and the purpose of this catalog.

Sam’s wife, Frances Kratzok, an accomplished sculptor herself, has dedicated herself to finding the words that can help one understand and unlock the marvelous conversation that occurs within his work, and let viewers see how these assemblages of metal or wood impact our psyches to provide information, self-awareness and connection. Her direct, personal approach combined with her professional knowledge and shared life with Richards lets the reader see into his artwork in a revelatory way, uncommon in most artist biographies.

As were the exhibitions I worked on with Sam and Fran, this effort has been exciting, revealing, humbling, and pleasurable. I am confident the reader will gain both a greatly increased appreciation for Richards’ work and incredible insight into the ways an artist uses physical and formal techniques to offer us increased understanding of our world.

Sam Richards was a prolific sculptor. His experimentation was broad, deep, and lifelong. He was knowledgeable, articulate, and down-to-earth, a man of sparing speech, and personal and artistic integrity.

Born in Wilmington, Delaware in 1946, he was the youngest of three children. His father was a florist; his mother, a nurse. He spent his boyhood mainly in Berlin, Maryland, a town on the Eastern Shore, not far from Ocean City which was sparsely developed at the time and where, in his teen years, he spent many summers. This was post‐war, small‐town life. He had the run of the neighborhood, playing cowboys and Indians with friends and pestering his sisters. He loved swimming and body surfing in the ocean. He read Classic Comics, made toy boats, model airplanes, and a telegraph set, collected stamps and coins, and learned to draw and paint.

He was aware of the stories, objects, and records from his family’s long history in America. His father’s side arrived from Wales in the 1600s. On his mother’s side was Union General A.T. A. Torbert, whose uniform and boots he could see at the Zwaanendael Museum in Lewes, Delaware. These sparked interests in history and observation that were reinforced as he scavenged the beach, discovering evidence of sea life and, after hurricanes, old shipwrecks. He helped out a little in the florist shop and got into plenty of mischief, one time accidentally setting the field behind the nearby blacksmith shop on fire.

The family returned to Wilmington during Richards’ high school years. As his interest and ability in art grew, his family encouraged him, as did supportive faculty at every school he attended. He majored in studio art at the University of Delaware and there began to focus on making welded steel sculpture. He spent a summer at Skowhegan School of Painting and Sculpture in Maine and then two semesters at Tyler School of Art’s Rome, Italy program in between two years at Indiana University in Bloomington where he earned his M.F.A. in sculpture. During this time he also continued to draw, to study American, European, and African art history, and to develop skills in photography. He enjoyed exploring the environs of each of these new places.

At Tyler, he met student Frances Kratzok, whom he later married. Both were fascinated by their surroundings. They enjoyed and valued the search for and discovery of interesting forms, those each invented and those they found: natural and human‐made; humble and elaborate; ancient to contemporary; in art or implements. Examining the fossils they found at Calvert Cliffs, Maryland and along Indiana creek beds fed their curiosity. So did the artifacts of the past—pottery shards and stone tools—that they came across while on walks in the United States, Italy, and Greece. All of these experiences brought new insights and were later reflected in sculptures.

In the years immediately following school, Richards fitted sculpture‐making around a miscellany of jobs in Delaware, Maryland, and Pennsylvania, and then turned to full‐time college teaching. After a year at the University of Alberta, in Edmonton, Canada, he took a position at the University of Louisville in Kentucky. He and Kratzok established their home in Louisville where they raised their two children.

Richards found academic life a fertile environment. It reinforced and nurtured his love of studio practice and study, providing the time and resources he needed to make sculpture. He formed deep friendships with fellow faculty and students and respected their work. University of Louisville granted him two sabbatical leaves during which he traveled.

In 1982, he visited Greece, staying in Athens and on Crete, in Heraklion and near the ancient site of Mallia. In 1989, he traveled to Florence, Italy. On both trips he immersed himself in the histories, mythologies, and literatures of these places, drawing and photographing at many sites. These experiences impacted the sculptures he made later in Kentucky.

Richards made most of his sculpture in his studio at the University of Louisville. The serious example he set for students and his easy accessibility helped build the sculpture program. Richards’ work and the flow of students in and out of the sculpture studio generated constant activity. Sparks flew from arc welders, grinders screeched, hammers pounded, drills hummed, oxyacetylene torches whooshed, crackled, hissed, and sometimes popped – all of this over a radio blaring the news or jazz, rock, or classical music. Materials accumulated in mountains everywhere.  Amid this scene, Richards was focused on whatever he was making, always challenging himself.  Even as demands of school and family increased, he remained prolific.  He exhibited often, selling to public and private collections.

Richards became ill from a brain tumor in the summer of 1993 and died nine months later, just before his forty‐eighth birthday.

She has taught sculpture and art classes at several colleges in the Louisville area and exhibits regionally.  She was married to sculptor Sam Richards.

I think [this book} is a real contribution to HOW TO SEE ART and would warmly recommend it to any reader, but especially sculpture students.  [The author] set up the conditions for a deep and personal interaction between the viewer and the work of art. That is very valuable, and the only real benefit of art criticism of any kind is to make the viewer look more and more deeply.”

Sam Richards’ work embraces a language of form which speaks across cultures and time.  Through the poetics of sculptural practice, grounded in observation and experience, Richards describes the joy of human existence.  His deep understanding of the craft allows for a true mate-rial translation that works with and continues the canon.  This book will resonate with those who represent the world through the physical object.”

Seeing Sam Richards’ Sculpture is a comprehensive and deeply understanding study of the work of sculptor Sam Richards (1946 -1994). Richards’ work in steel and wood is a reflection of his life-long investigation into the nature of form and material.  Working by improvisation he created articulate freestanding and wall sculpture that has strong kinship with the work of Anthony Caro, David Smith, and Issac Witkin. Richards shares with them a love of the non-representational, independent thing – what poet Wallace Stevens called ‘the object at the exactest point at which it is itself’”

Frances Kratzok takes us into Sam Richards’ creative mind and studio as she dissects every aspect of his sculpture. The dissection provides us with the building blocks artists use as they create. She describes those steps from the smallest weld, grind, and screw to the grand overview of the completed work. From the kind of material and its source to the gallery wall or floor, it is a comprehensive dictionary dedicated to the visual interpretation of sculpture.”