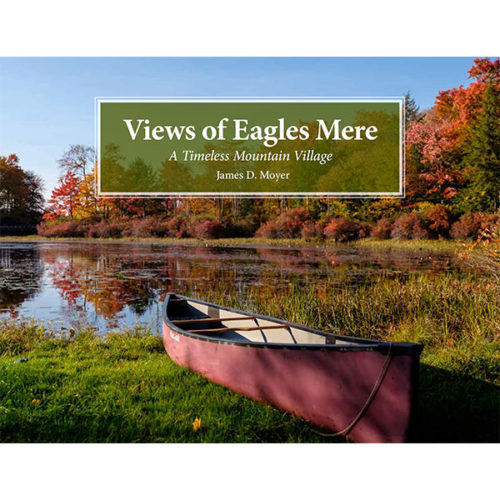 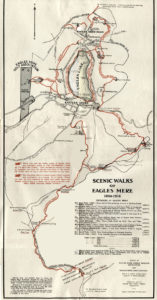 Eagles Mere is a remote village which sits at a high point in the Allegheny Mountains of north central Pennsylvania, located in the second least populated county in the state. Tucked in among state game lands and state forest, one side of the mountain drains into the Loyalsock Creek, 1200 feet lower, and the other side empties 1300 feet below the summit into Muncy Creek. Although much of surrounding Sullivan County is forested and takes its culture from the eastern mountain region, Eagles Mere has been a retreat for the gentry from Philadelphia, Harrisburg, and Baltimore since the late nineteenth century. Bankers and businessmen built large summer homes in the early 20th century to take advantage of the pristine lake. The other, year-round residents of the region take their recreation in cabins owned by hunting clubs, in search of whitetail deer and black bear in the fall.

Although railroad shareholders built a narrow-gauge railway to the Victorian resort hotels at the summit of the mountain, a federal two-lane highway designated the Appalachian Throughway now runs at its base. U.S. 220 weaves among wooden houses along the creeks. These year-round houses in the valleys represent a practical and traditional eastern mountain architecture. The design of the valley houses differs from the more formal style of the mountaintop cottages, which are often owned by those who live most of the year in cities. Bowhunters and bankers; high mileage four-wheel drive Ford pickup trucks and new Chevrolet Suburbans with high-tech strollers; year-round loggers and seasonal urban refugees, all populate the mountain.

This book is the first generally available publication of contemporary, twenty-first century Eagles Mere photographs. It represents my work from 2014 through 2019, six years of wandering the mountain and the surrounding counties. Having come to Eagles Mere since 1960, I am guilty of some nostalgia for an earlier time of spending two unstructured months every summer, wandering the woods and swimming at the beach. The photos here are all mine, and reflect my judgment of what is arresting, fascinating, or representative. I have mostly chosen the pretty over the gritty, but you will find some backroads selections which show the diversity of the county and suggest the deeper needs of its year-round community. If you choose to look a bit closer in Sullivan County, you will find where Brigadoon’s gauzy periphery meets a traditional eastern mountain culture.

I dedicate this collection to my wife Tay Wilkins, who is eternally patient with my heading out of our cottage with a camera and a cup of coffee before sunrise. You never know what you will find when you keep stubbornly searching. 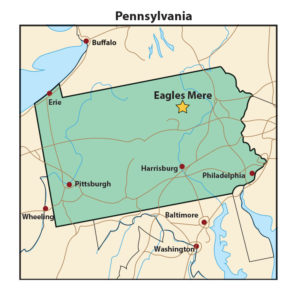 Jim Moyer started coming to the village of Eagles Mere, Pennsylvania in the late 1950’s, when he and his parents, brother and sister lived in New Jersey. In the early 1960’s, his parents built a cabin in Eagles Mere. For more than 55 years, he has come back to the mountain annually. Jim and his wife Tay recently rebuilt the cabin, where they now spend as much time each year as possible.

Jim is a graduate of Yale and Virginia Law School. He served full time on the federal trial bench in Louisville, Kentucky for nineteen years as a United States Magistrate Judge. He continues to serve part time in that position.

Jim’s study of photography accelerated when he stepped down from full-time service as a judge in late 2014. Since then, he has photographed landscape, architectural, and documentary work during several months each year in Eagles Mere and the surrounding region of the Allegheny Mountains. He has pursued wildlife and landscape photography in Costa Rica, Ecuador, Patagonia, Canada and Alaska, and has photographed extensively for non-profit groups.

Right-click to save files: OSP-Views-of-Eagle-Mere-HiResCover-v1.jpg